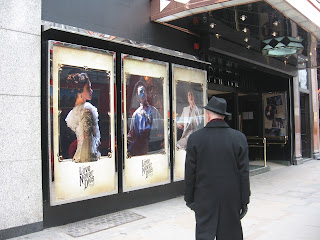 Yes, you read the title right.  Fresh from Broadway.com today.

"The sequel to the longest-running show on the Great White Way will finally land in the U.S.!"

This is going to stir the sleeping bees nest. I remain silent, neutral, non-committal.

I've already seen it four times in London (both the original and revised version, but not the final revised that was released in Australia on stage - only on DVD).  The picture at the left was taken by me outside the Adelphi Theatre.

The most memorable moment?  Ramin Karimloo's arm around my waist getting my picture taken with him at the stage door.

The remainder is too controversial to get caught up in that argument again.  I refuse to get drawn into the ruckus.

Posted by Vicki Hopkins at 8:39 AM