What Makes a Great On-Stage Phantom? 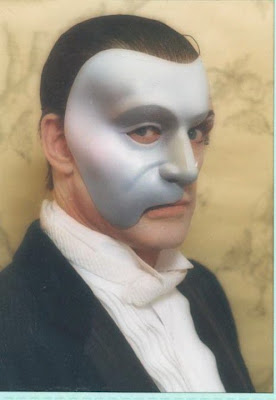 Wow, that question just popped into my head, as I look forward to having Peter Karrie on All Things Phantom on September 10, 2011 @ 12 Noon, PST. His performances have earned him the title of “The World’s Most Popular Phantom” on two separate occasions, and we're very excited to talk with him about his portrayal of the role.

However, the question remains open to you, my readers. What makes a great on-stage Phantom in your opinion? We can think of many greats from the past who have played the role from Michael Crawford to John Owen Jones, currently in the production at Her Majesty's Theatre.

As I've wandered the Internet and various forums, you often see posts from individuals who talk about their favorites. Each person seems to have their own idea of what makes a great Phantom and why that individual's performance touched them above others.

Of course, none of us have probably seen every single man on stage who has worn the mask around the world in the various productions. In case you are curious who has worn the mask in the past 25 years, there's a good thread on Deserted Phans, a forum for POTO, attempting to list all who have played the iconic Opera Ghost. CLICK HERE

Out of the ones we see on stage, each fan seems to pick one performer that moves them the most in their performance. Out of the four Phantom's I've seen perform the role, Scott Davies, is my favorite. I wish I could say, I've seen Peter, but I have not.

So what are the qualities of a great stage Phantom? Where in the production do we judge the pinnacle of their performance to form an opinion? Music of the Night? Point of No Return? Final lair scene?

Do we take into account the vocals of the performer? How about his nuances of the portrayal of the Phantom himself -- like the way he moves across the stage, or uses his hands and fingers? How about the acting and his reactions such as his cries, his tears, his rage, his parting words of love to Christine? There are so many variances, it's really hard to point to one single thing that makes a great Phantom. Frankly, I think it's whatever touches you as an individual in the whole of the performance itself.

The character of the Phantom is portrayed differently from actor to actor. Always the same lines, usually the same choreography, but differences of interpretation as to the personality of the individual in the black cape. One may appear more menacing and evil than another in the final lair scene or another perhaps controlling, frustrated, or broken.

In the Music of the Night, seduction, passion, and chemistry between Christine and the Phantom vary too. How many have you watched them glide their hands across her body and sway her in a certain way that gives you that craving to be embraced by that bad-boy? I find it quite fascinating, because some people are more prone to the "sexy" Phantoms rather than the "dangerous" psychopath that has you in his clutches. Ah, such sweet intoxication!

I guess whatever floats your gondola is the one you'll choose as your favorite great on-stage Phantom.

Anyway, tune in if you can to hear Peter Karrie. We'll promise to pick his brain about his interpretation of the Phantom of the Opera and perhaps learn why he was chosen as the favorite of many.

If you want, comments are open this time. Feel free to post what makes a great on-stage Phantom in your eyes.

Regards,
The Phantom's Student aka Vicki

Enjoy Peter in the Music of the Night:

It's quite an interesting question to think about, isn't it? When I think of my favorite stage Phantoms, I find that they all tend to be very different from one another. I think one trait I tend to look for is that the actors think of their own reasons for why the Phantom does what he does in the show -- in other words, they put some thought behind all aspects of their portrayal instead of doing things just because it's what the script or the director said to do. If the actor can do that, then I find that the rest of his performance will work for me, whether he then chooses to play the Phantom as more violent and angry, controlled and sensual, or whatever else. Though I do tend to prefer Phantoms who are more violent and edgy, as well.