The Amusement Park is Closing Down In London 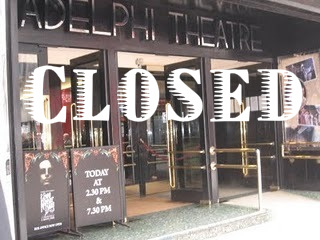 Well rumors yesterday swelled on the Internet, and my Google alerts filled my inbox this morning. Andrew Lloyd Webber's production of Love Never Dies in London is closing August 27. There is no word of reworking it in London, though the Melbourne show continues in Australia.
Read here the morning news at:
Variety
Broadway World
No doubt a variety of reasons pushed the show to close in London. The Adelphi is co-owned by Webber and another group, who wished to bring in a new production hopefully more profitable. In addition, the bad reception in London and the opposition from a certain campaign tainted the show from the beginning. As far as critics, critics are critics, and mediocre reviews were published. However, some of the general public and the fans generally liked the show, in spite of the crap thrown its way. The voices that were the loudest, didn't necessary represent the entire Phantom community.
I'm so very thankful I had the chance to see it both in its original version and revised version and have been blessed to watch the performances of wonderful performers. Frankly, I never would have made it to London and enjoyed my first experience of English soil, if it hadn't been for the lure of seeing the show and reporting on it when I returned.
My heartfelt good wishes go out to all the cast as they move onto other opportunities. And to Webber, I say, thanks for letting me observe in London the choreographed reunion of my favorite two characters, Christine and the Phantom.
While some are no doubt having parties and others are already standing by the grave ready to throw the first clod of good-riddens dirt on the London production's coffin, it's still alive elsewhere on stage in the world. If Webber stays true to his plans, it will tour Australia, and perhaps one day visit Toronto and Broadway.
Usually we say it ain't over yet until the fat lady sings. In this instance it ain't over yet until the last one is thrown over the pier and drowned. My support of Webber and his endeavors continue, as I admire the man greatly and enjoy his creations.
To the London cast who leaves - GOD BLESS EVERY ONE OF YOU!
To the naysayers I say, don't rejoice over the failure of another.
To the lovers and supporters of Love Never Dies, rejoice in what you had the opportunity to enjoy in London.
To Webber I say, take heart, there are those that still support you and your creative right to take Love Never Dies elsewhere.
I'm itching to say so much more! I hate it when I have to bite my tongue. I really hurts.
Sigh...
The Phantom's Student


NOTE:  I've closed the comments on this post for a variety of reasons.  Mostly, I just don't want this blog to turn into a forum debate about Love Never Dies.  There are so many other places on the Internet to talk about the likes, dislikes, and its recent demise from the West End, that I just don't feel it appropriate to rehash the matter here.  Thanks for your understanding.
Posted by Vicki Hopkins at 7:21 AM