Thank you to The Malta Times for the wonderful book review.  In addition, they also took the time to interview me regarding the novel and my status as a self-published author.  I truly appreciate the kindness and support of the writer and sub-editor who contacted me to do these two wonderful pieces for The Sunday Times.  It was quite a surprise to say the least!  The Phantom has found a new home on the isle of Malta in another fiction sequel penned by a lover of his story. 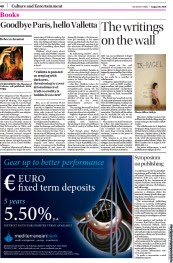 The ubiquity of the Phantomof the Opera franchise shows no signs of abating. The Angel of Music has sung his way through musical, film, novel and even children’s literature. And his voice remains as strong as ever, continually lending itself to new...read more... 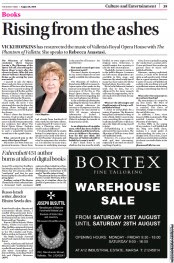 Rising from the ashes

The Phantom of Valletta continues where Gaston Leroux’s ThePhantomofthe Opera left off , describing the Opera Ghost’s story after the events in Paris . Why did you choose Valletta’s Royal Opera House as the setting for your new novel? I wanted to...read more...

Congratulations! I'm very excited for you! And happy for us who love dear Erik, that there's another tale told...

I'm SO EXCITED that this is available for the nook! I love Amazon for many things, but am partial to Barnes and Noble for their eBooks.

Well, I have much to read before I get to yours - although rest assured I will. =)

Have purchased your eBook for my nook! =)

So I'm skipping the reviews until after I've read it. Which won't be for a bit as I'm currently reading something else, but I just couldn't wait to buy it!

Well, I finished your book and wanted to comment. I will tell you that with each book I read, I get a different picture of Erik in my mind's eye. Your Erik is the one in the beautiful illustrations you have to the right of this blog; tall, thin, elegant. I think, who would play the Erik of your story?

Desiree for me was easy, although I'm not sure that you will agree. Although I believe you wrote her petite (and the person I have in mind is not) - Taylor Swift is my top pick. I saw your website with a blond woman, but I still pictured Taylor S...

Well, the story was fresh and interesting. I have enjoyed all the stories - each person writes with a great deal of respect for the characters, from what I can see. You are no exception. You had kept all of the elements of Erik's personality intact. And I loved Christine and Raoul! They were darling and so caring toward Erik! They are always and forever in my mind Emmy and Patrick =) Your Mme. Giry seemed different than Webber's - more Leroux' to me - as was your Erik different from "Gerik". But no matter. Beautiful Ramin is different as well...

Still, I cannot think of who? I thought back to Leslie Howard - who was a wonderful Scarlet Pimpernel - and Fred Astaire, who was elegant as well. But he escaped me.

I read that Daniel Day Lewis is set to play Lincoln in Steven Spielberg's production next year. He's tall and has a mysterious way about him...

I just don't know for sure.

Let me know who you had in mind?