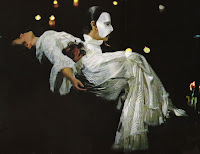 Let’s attend an opera and listen to the musical score the Phantom has written - Don Juan Triumphant. This post is only from the movie view, as I know my Leroux friends will have their own interpretations.
What is this strange opera that the Phantom writes? Who is Don Juan anyway? If you’re not familiar with the story, Don Juan (or Don Giovanni in other adaptations) is a legendary fictional tale about a libertine (a term for a man who is morally or sexually unrestrained). He enjoys fighting, he rapes, and seduces women. In the story he seduces a woman from a noble family, and kills her father. The ghost of the father invites him to dine with him in the cemetery. Don Juan accepts, only to be tricked into shaking the hand of a statute that grabs him and drags him into hell.

The Phantom’s title, however, is Don Juan Triumphant. It’s his declaration he will triumph in his conquest and seduction. As you first listen to the opera, the music is very chaotic in nature. Even the audience looks at one another wondering what strange opera they’re attending. The music is no doubt inspired by the chaotic agony within in the Phantom’s mind. His opera story is basically the same, one of seduction of his prey and conquest over her. He uses the opera to set the stage to seduce Christine and lead her into a trap.

The Point of No Return is no doubt the most erotic musical scene I’ve ever watched. The Phantom in Leroux said Don Juan Triumphant was, “Music so terrible it consumes all those who approached it,” and Christine found it intoxicating. Perhaps this is where Webber gets his inspiration for the scene. The Phantom gives Christine a song to sing to him where he makes her confess her unspoken deepest desires and passions she feels for him. He sings to her seducing her into the trap, even though he himself is in danger of capture. He risks everything to express his deepest desire for her. For a brief moment, Christine lays against his chest caressed in his arms lost in his seduction of her. As we know, she exposes him instead. He takes her by force and drags her back to his own hell.
Have you ever been seduced?

Order Lessons From the Phantom of the Opera in Paperback Here
Posted by Vicki Hopkins at 8:25 AM

Email ThisBlogThis!Share to TwitterShare to FacebookShare to Pinterest
Labels: Don Juan Triumphant, seduction, The Phantom of the Opera

What a magnificent post!!! I looove the Phantom of the Opera movies. Have seen a couple of versions. The haunting, sad story entrances me with the beauty that underlies it.

I have been posting about global peace on my blog too. I believe blogging unites the world. ^5!

Here I am again. I just read what you posted on my blog. No WONDER I connected with your blog. :D You're a kindred spirit.

Don Juan is a Spanish legend told the first time by the priest Tirso de Molina. The title of the drama was Don Juan Tenorio or The stone guest.
I love this story, indeed. The author wanted to show people how they had not to act like Don Juan, but people loved Don uan's story so much than everybody loved the character instead of hate him. And that's how his legend continued.
Don Juan was handsome, buthe has no soul. Maybe Erik wanted to achieve the contrary with his music...