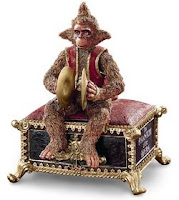 Embodied in the music box is more meaning than what I’ll post here. The music box is a monkey dressed in Persian robes, playing the cymbals. In the original Leroux work, the Persian was an individual who knew much about the Opera Ghost's past.
What I’d like to focus on, here however, is what fascinates me the most about it, and that is Raoul purchasing it at auction. It’s that deed alone that peaks my imagination and opens up a world of possibilities, some of which have, and will continue to be, searched out in sequels to the Phantom of the Opera.
However, the movie does not give us an answer; it only teases our imagination to wonder why Raoul, who fought so hard to free her, buys a memento of her captivity with the Phantom and leaves it at her grave.

Christine has spoken often about the piece. The music box playing the tune Masquerade. Was Christine playing a masquerade of her own? Her outward face loving Raoul, and behind the mask still loving the Phantom.

If I had the creative ability to write a story from this one act, I would. However, I don’t, so I’ll leave it to the wonderful authors who do. My interpretation? I see in that one act that Raoul knew throughout his life with Christine, that though she married him, part of her heart always belonged to the Phantom. Raoul, now in her death, decides to acknowledge her longing for him by leaving at her grave something that was precious to the Phantom. What climax the scene holds, however, that after this selfless act, as if he’s giving that part of her back, he is astonished to see the Phantom’s rose, the black ribbon, and the ring he gave Christine on her gravestone. As the stag ran ahead of him along side the car as he drove to the cemetery, so the Phantom had always been one step ahead of him all along the way. He's left his message that as he always had a part of her in life, now in death he will have her for eternity.

What meaning do you find at the grave of Christine in the act of the music box and the rose? As you can tell, I'm a hopeless romantic. No doubt you are as well.

Order Lessons From the Phantom of the Opera in Paperback Here

Posted by Vicki Hopkins at 8:33 PM

Email ThisBlogThis!Share to TwitterShare to FacebookShare to Pinterest
Labels: Christine, Monkey Music Box, Raoul, The Phantom of the Opera

I agree. He did look a bit scared, because he knew he had never won her heart completely.

This part always makes me cry. The rose shows the viewer that Erik is still alive, and still loves Christine very much. And he kept the ring for all those years! Poor Erik. . .

What is the origin of the music box? It's not in the original book, yet plays a strong role in the Webber musical.

It's was all ways cool but why would he be scared?, he was married 2 her and she died so he brought her a gift.

if you have seen the sequel to Phantom it shows how Christine dies and that her child wasn't actually Rauol's son. It was Erik's, and he accepts him as his father right after Christine admits her undying love for Erik but before she is murdered.