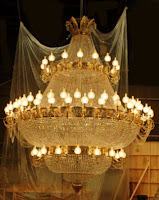 Symbolism abounds in the lot number. Probably the most obvious reference to darkness, the number 666, the lot number used to identify the chandelier at auction. It’s the biblical reference in Revelations attributed to the mark of beast (“Let him who has understanding calculate the number of the beast, for the number is that of a man, and his number is six hundred and sixty-six.” NASB Revelation 13:18)
The lot identifies the portion in life assigned to the Phantom by fate, which is one to live in a world of darkness and rejection, assuredly associated with hell. As he drags Christine back down to his world in his last attempt to have her, he cries that he's taking her back to his dungeon, prison, and hell.
The chandelier on the other hand is a grand representation of light before destruction. It illuminated the world of the Opera Populaire at the height of its grandeur, but is destroyed and becomes a chandelier in pieces. The Phantom succeeds in ultimately destroying the beauty of the world he loves and plunges the opera house into darkness and burning fire. Yet, at the auction, the chandelier has been somewhat repaired and illuminated once again, and is hoisted up as if to ask for someone to resurrect it from the darkness it’s been plunged into and restore it as it was once before.

What lesson can we draw? Perhaps, your lot in life is not one you would have chosen. Are you looking for someone to redeem you from the darkness you’ve been plunged into and resurrect you into a new life? Let your mind wander through the symbolism of the lot number and the chandelier and see where it leads you.

Order Lessons From the Phantom of the Opera in Paperback Here
Posted by Vicki Hopkins at 12:01 PM

Email ThisBlogThis!Share to TwitterShare to FacebookShare to Pinterest
Labels: chandelier, lot 666, Opera Populaire, The Phantom of the Opera